Tracey members around the world 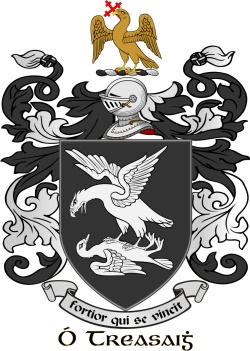 He is stronger who conquers himself

Design your own Tracey Family Crest

There are at least four distinct septs of this name recorded in the ancient sources: of south-east Galway who, though dispersed in early times, are still represented in their ancient territory; of County Cork and Limerick, with connections to the royal house of Munster (MacLysaght, 'Irish Families Series' 1980s eds); of County Leix, Slievemargy Barony, where they were lords of the Uí Bairrche. Connelath McTressy, Crayn McTressy, Euercath McTressy and Mardauth McTressy occur in the 'Red Book of Ormond' in 1304, as located in Cloncurry Co Kildare. De Bhulbh in 'Sloinnte na h-Eireann', (2000) says there was a sept in Co Fermanagh.

In R.E. Matheson's 'Special Report on Surnames...in Ireland' (1894 & 1909) based on the birth registrations of 1890, Tracey and Tracy occur mostly in Co Dublin, and Treacy in Cos Tipperary and Galway

Some families of Trac(e)y may derive their name from either of two places called 'Tracy' in Calvados, Normandy. One Tracy line from this Norman origin is that of a well known Devonshire family, an ennobled branch of which is the Barons Sudeley. The name was also carried to Ireland by Settlers who established themselves in Co. Limerick, see the baronets Tracy and Viscounts Rathcoole & c. Coincidentally co Limerick is the homeland to a native O'Tracy sept. Some numerous Irish surnames are identical in their anglicised form to British names, borne there by 17th century English officials and settlers (v. Appendix).

Seán Treacy (1895-1920) of Soloheadbeg, Co Tipperary, hero of the Irish War of Independence 1920-21. Along with Dan Breen, he took part in the first action, an ambush of Crown Forces near to his home.

Spencer Tracy (1900-1967) Great Irish-American actor. Making a name first on Broadway, he starred in many Hollywood classics, such as 'Captains Courageous' (1937), 'Mannequin' (1937: with the great Joan Crawford) and 'Boys' Town' (1938). Two of these films earned Tracy an Oscar for best actor. In fact, he held the record, along with Olivier, for the most nominations. In 1940 Tracy was voted the nation's favorite movie actor in the magazine 'Fortune'. 'The Last Hurrah' (1958) is one of my own favorites, in which Tracy takes the role of an Irish-American mayor seeking re-election; he was chosen as 'Best Actor of the Year' by the National Board of Review, for that year. Perhaps one of his most memorable latter-day performances was in the film 'Judgement at Nuremburg' in 1961.
Ó C.

Addendum:
884 AD Treasach, son of Becan, chief of Ui Bairche Maighe, was slain by Aedh, son of Ilguine. Of him Flann, son of Lonan, said:

'A heavy mist upon the province of Breasal, since they slew at the fortaliced Liphe, Heavy the groans of Assal, for grief at the loss of Treasach. Wearied my mind, moist my countenance, since Treasach lies in death. The moan of Oenach Lifi all, and of Leinster to the sea, is the son of Becan.'

The first reference to the name was in 1008 AD where it states "Gussan, son of Ua Treassach, lord of Ui-Bairrche, died".

The earliest reference to a Tracy in America was in 1653.

Many thanks to Declan Tracey from www.TraceyClann.com for this information.

The Tracey Family Message Board