Murphy members around the world 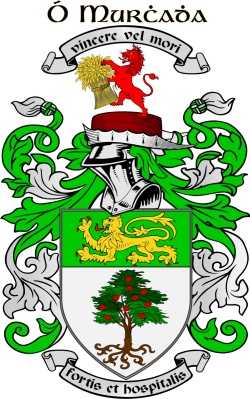 Design your own Murphy Family Crest

Ó Murchadha or (modern) Ó Murchú - anglicised as Murphy and earlier as (O) Murchoe, Morchoe etc means ’sea warrior’ in Irish. As Murphy it is the most numerous surname in Ireland, although there are more Murphys now in America than there are in Ireland.

Mac Murchaidh - also anglicised as Murphy. Woulfe in 'Sloinnte Gaedheal is Gall: Irish Names and Surnames' adds that this name is the Ulster variant of:

Mac Murchadha- a Leinster name and the 'tribe' of the infamous king of Leinster Dermot MacMurrough, who invited Strongbow and his Welsh-Norman mercenaries into Ireland, thus involving England in Irish history. The infamous Dermot's grandfather, Murchadha or Murrough, is the eponymous ancestor of the Wexford MacMurchadha, not of the Ó Murchadha sept who were also in Wexford. According to Woulfe (op. cit.) Dermot's descendants gave rise to the distinct surname Cavanagh or Kavanagh, through his son Domhnal Caobhánach.

There are several septs of Ó Murchadha recorded in counties Tyrone, Sligo and Wexford; the latter were a branch of the Uí Ceinseallaigh. It is probably this family who became very numerous. It is also likely that the Co Cork Murphys are a branch of this Wexford sept.

In William Petty's 1659 Census, the following are recorded:

These are the main concentrations of Murphys in the 1659 Census. In Co Sligo a few McMurey(11) and McMorey(14) occur, otherwise there are no other names resembling. It is worth noting how the anglicisation 'Murphy' appears in the 1659 Census to be in the process of replacing the earlier forms of O Morroghow etc.

Two famous Murphys:
Father John Murphy D.D., acted as one of the leaders of the Wexford Rising in 1798: he was brutally put to death on the 26th June 1798.
William Martin Murphy founded the 'Irish Independent' newspaper in 1905. He was the aggressive leader of the anti- workers' employers association in the Dublin 'Lock-Out' of 1913.

The Murphy Family Message Board