Kennedy members around the world 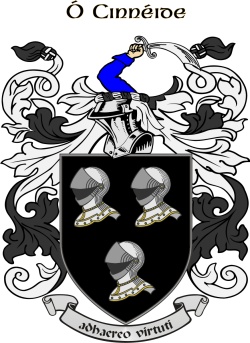 Design your own Kennedy Family Crest

A family of this name were a sept of the Dál gCais or Dalcassian tribe, itself possibly a branch of the Déisi. Woulfe in 'Sloinnte Gaedheal is Gall' (1923) writes that they descend from Cinnéidigh, a nephew of Brian Boru; however, MacLysaght in the 'Irish Families' series (1980, 1982) gives their eponymous ancestor as Cinnéide, Brian Boru's father.

Originally of Thomond in east Clare, they were pushed further eastward (ironically by their distant kin the Uí Bhriain) in the Medieval period into present northern Co Tipperary, actually coming to dominate the baronies of Upper and Lower Ormond. During almost four hundred years, from the 12th until the 16th century, they were lords of Ormond; they were known as four main branches: Ó Cinnéide Fionn, Ó Cinnéide Donn and Ó Cinnéide Ruadh (fair, brown and red). They held several castles in north Tipperary throughout the period of wars and conflicts, such as at Nenagh and Dromineer.

They occur frequently in the 'Annals' of Ireland, often in a military context. The highest numbers of Kennedy were to be found in County Tipperary right up until the modern period. The name is in the top 20 for all Ireland.

Some Kennedys, however, are of Uí Maine stock, whose territory lay in what is now Co Galway.

MacLysaght says that a branch of the Ormond sept migrated to Co Antrim at the beginning of the 17th century. This brings us to the Scottish Kennedys, whose name is of similar derivation, but whose ancestry, in the opinion of the present writer, is entirely separate from either of the above Irish septs. They were a clan on the south west coast of Scotland, their earliest holdings being around Carrick in Ayrshire. Their name stems from Gaelic 'Cunedda'; the root is 'head'. They appear early in medieval records as MacKenedi; they became very powerful as Earls Cassilis of Culzean Castle. Some bearers of this Scottish name must have crossed the narrow channel to Co Antrim.

A further point is that any connection between the Irish and Scottish Kennedys is purely one of etymology; there is no evidenced genealogical connection.

By the time of Cromwellian Sir William Petty's 1659 'Census' of Ireland, we find Kennedy listed as a 'Principal Irish Name' in the following counties:

Returns for Co Galway are missing.

In 1890 (Registrar's Report) most Kennedy births occurred in counties Dublin, Antrim and Tipperary.

Matthew Kennedy (1652-1735) exiled to France after the fall of Limerick in 1691, he became an influential literary figure there.

John Fitzgerald Kennedy (1917-1963) arguably Ireland's most famous son; the first and only, so far, Gaelic Irish catholic leader of the most powerful country in the world. His death, like that of Michael Collins before him, had all the dimensions of a Greek tragedy.

The Kennedy Family Message Board