Kelly members around the world 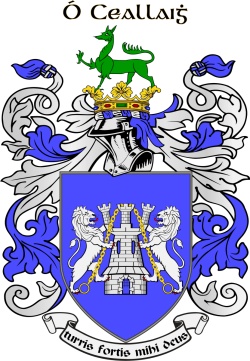 God is a tower of strength to me

Design your own Kelly Family Crest

Ó Ceallaigh is angliciized as (O) Kelly. the name Ceallach has been translated as 'strife' or 'contention' or 'bright-headed'.

There were several powerful distinct septs of the name. The two most influential were the Uí Maine sept in Oriel, ruling extensive lands in Connacht, and the Southern Uí Néill sept in Meath who were lords of Brega, near Navan; they were one of 'the four tribes of Tara'. Other septs were in Derry, three in Laois, one in Wicklow, one in Sligo and one branch of the Corca Laoidhe in west Cork

In the Registrar General's Report on births in 1890, Kelly had the second highest number in Ireland, the most being in Dublin, Galway, Mayo, Roscommon and Cork. It was the most numerous surname in Kildare, Offaly, Galway, Leitrim and Roscommon.

'Mór, daughter of Donnchadh, son of Ceallach, and queen of Ireland, died': recorded in the Annals of Tigernach for 986.

Tadhg ua Ceallaigh, lord of Uí Maine, died at the Battle of Clontarf: recorded for 1013 in the Annals of the Four Masters.

Kelly is also a surname from the place-name Kelly in Devon (from 'kelli' which is Cornish for 'grove'), and a lord of the name, Warin de Kelly, is recorded there as early as 1194 ('Pipe Rolls', Richard 1). The family still occupy the place, and have done for 900 years. Their very ancient coat of arms, quite distinct from that of the Irish Kellys, are illustrated below in the Gallery: the general principle being the more simple the blazon, the more ancient.

Place names in Scotland, Kelly near Arbroath in Angus and Kellie in Fife, have also given rise to the Scottish surname Kelly. John de Kelly was abbot of Arbroath from 1373. The Scottish place-name comes from the Gaelic 'coille', meaning 'wood'. Kelly is also a byname of the clan MacDonald.

Appendix.
There are many Irish names whose anglicised forms are identical to lesser known British names; individuals bearing these British names were in Ireland during especially the 17th century, as officials, settlers and soldiers. (v. Appendix). This would not affect the majority Irish provenance of the name; the majority of Kellys in Britain are probably of Irish immigrant extraction. However, some Kelly families in Devon, Cornwall and Scotland would be of indigenous stock.

The Kelly Family Message Board