Joyce members around the world 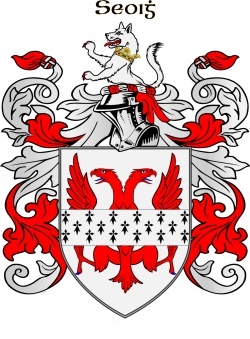 Death, or life with honour

Design your own Joyce Family Crest

Joyce- this ancient name, which was Gaelicised as Seóigh after it had arrived in Ireland with the Norman invaders in the 12th century, has an interesting etymological history. As a surname it has two possible origins: as a first name and a place name: however, both ultimately go back to the first name, that of a Breton saint, Iodoc, and was borne as such in Brittany, as Judoc and Jugez. Various publications have derived this given name from Breton 'lord', although this must surely be speculative. Breton mercenaries joined William the Conqueror's invasion of England in 1066, and given the popularity of the name, would have carried it with them. One of the Norman version of this name was Josce, and is recorded in 1150 in Lincoln, and there is even a Flemish version, Joast (see next paragraph).

The place name Saint-Josse-sur-Mer is that of a commune in Nord-Pas-de-Calais in north-west France. According to legend a Breton prince, the very same as above, renouncing worldly power, sought sanctuary, and a life of piety at this remote place in the 7th century. He became widely known and admired. A small monastery was built, and named after him. His relics are still in the village church in Saint-Josse. A cult soon followed this extraordinary man's death; his name became very popular in England during the Middle Ages, as a given name for both sexes. Thus Joyce also became a British surname.

The surname is said to have been in Ireland as early as the late 12th century, possibly from a Joyce family that had settled in Wales. Many Norman families, such as FitzGerald/Carew (these are the same family), Barry, Cogan et al were really Cambro-Norman, that is males bearing these names had married into the Welsh nobility. The Breton root of Joyce adds an extra dimension, Breton and Welsh being close cousins. According to Woulfe ('Sloinnte Gaedheal is Gall', 1923), the Joyce family who acquired a vast tract of Connacht, known as 'Joyce's Country', came from Wales in the late 13th century. A Thomas de Jorse, who is said to have married into the O Briens, is mentioned in MacFiribis' 'Genealogies' as the progenitor of the Galway Joyces.

At any rate, whatever the provenance, the Joyces of Connacht were one of the 'Tribes of Galway', the largely Norman elite of the city of Galway, and together with their cousins of Duthaigh Seógagh (Joyce's Country) in Iar Connacht, ensure that Joyce became largely a Galway and Mayo name. A small branch of this family settled in Co Cork, and it is from this branch that the illustrious author, Dubliner James Joyce, came.

Sir William Petty's 1659 'Census', which recorded 'Principal Irish Names' in Ireland during the Cromwellian Expugnatio, is disappointing apropos Joyce as both counties Galway and Mayo are missing from the 'Census'.

William Joyes was Archbishop of Tuam in the late 15th century.

Richard Joyce (fl 1700) a goldsmith from Galway city is said to have designed the Claddagh ring, in its modern form. An early example was found with his monograph on it. There are several legends linking the Joyce family to the Claddagh ring, e.g. a Joyce, crusader knight, who was captured in the Middle East learned the art of smelting gold and silver and created the origins of the Claddagh ring; another that it was dropped by an eagle into the lap of the charitable Margaret Joyce, wife of a late 16th century Mayor of Galway, Oliver Og French.

James Joyce (1882-1941) the great Irish writer, born in Dublin. His lucid, yet complex, writings have become world classics. Most approachable are his short stories of Dublin life in the early 20th century, 'Dubliners', and the autobiographical 'Portrait of the Artist as a Young Man'. However, it is the innovative 'Ulysses', based on one single day's perambulations of Dublin Jew Leopold Bloom, that has attracted widest praise: 'Bloomsday' is a yearly event in Dublin which attracts the cognoscenti from across the globe. Joyce may justifiably be regarded as the 'greatest' 20th century writer in English.

Michael Joyce (b. 1945) American writer of 'electronic fiction' and professor of English at Vassar College, New York. His 'afternoon: a story' , which is a 'hypertext' is regarded as one of the first serious pieces of literature to come from the genre of electronic hypertexts. This work has been described as 'the grandaddy of hypertext fictions' (Robert Coover, New York Times). Voila!


Footnotes:
Galway Joyces have also long been noted for their grreat physical stature. In fact, the present writer has seen a documentary about the bare knuckle boxers of the Travelling Community. One such Traveller family featured in the programme was named Joyce, an ageing member of which, towering over everyone there, swung into action with flailing fists and flowing moustaches.

The Joyce Family Message Board