Hughes members around the world 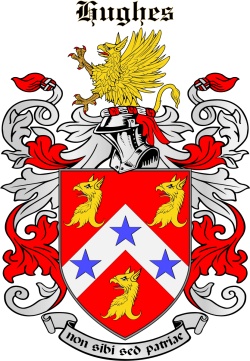 Not for self, but for country

Design your own Hughes Family Crest

Ó hAodha - this name, from the conjectural origin 'fire', according to Woulfe in 'Sloinnte Gaedheal is Gall' (19230, is the name of perhaps a dozen unrelated septs and families thoughout Ireland. The southern anglicised form is Hayes; in the north it is anglicised uniformly as Hughes. The certainty is that the name comes from the first name Aodh, which was always anglicised as Hugh in Ireland.

MacAodha of Cos Cavan and Galway may also have influenced the name's formation.

As far as the Irish Hughes are concerned, the name is that of a sept of Ó hAodha, formerly Lords of Uí Fiachrach in Ardstraw, Co Tyrone; also of a sept of Tirconnell, chiefs of Eas Ruadh; also of a family, chiefs of Fearnmaighe in Co Monaghan. There are two families whose origin is in Meath: that of Lords of Odhbha, near modern Navan, and that of chiefs of East Teffia (Tir Teathbha). The men of Teffia feature in the inter-tribal strife of the 10th and 11th centuries recorded in the Irish Annals.

The Uí Fiachrach connection is significant, for there were two such families of Ó hAodha in Ballintobber, Co Mayo and Dromard in Co Sligo.

In Sir William Petty's 'Census' of 1659, an examination of the above counties reveals the following listed as 'Principal Irish Name':

The returns in the Census for Co Tyrone and Co Mayo are missing.

The Registrar's Report on Births in 1890, feature the province of Ulster with 180 births, double that of its closest rival, Leinster, with 92.

Hughes is in the Irish top 40 surnames, and is 15th in Ulster.

Hughes is also a patronymic surname of Welsh provenance, via 'Huw', a Welsh first name, and possibly influenced by the Norman introduction of the Germanic name Hugh. At the time of the British Census of 1881, the relative frequency of the surname Hughes was highest on Anglesey (37.2 times the British average), followed by Caernarfonshire, Flintshire, Denbighshire, Merioneth, Montgomeryshire, Cardiganshire, Radnorshire, Carmarthenshire and Shropshire.

Hughes is also an English name of Norman origin. As a French surname, Hougues etc, it is principally of Languedoc.

The Hughes Family Message Board