Flynn members around the world 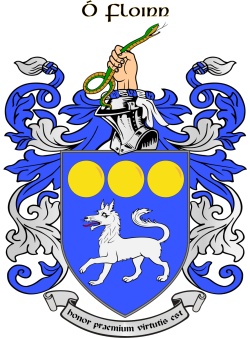 Honour is the reward of virtue

Design your own Flynn Family Crest

Co Roscommon
Ó Floinn (Ballintobber Barony, west Roscommon) a sept said to be descended from the legendary Maelruanaidh, grandson of Eochaid Mugmedón, 'lord of slaves', an early Irish king They were a branch of Uí Briuin, and chiefs thereof. Another family were erenaghs of Eas Uí Fhloinn, in the north west of the county in the Barony of Boyle.

Co Mayo
A sept of the name were hereditary erenaghs of the churh and monastery of St Tighearnan on the shores of Lough Conn in the Barony of Tirawly. Interestingly, there was a Tigernán uí Flaind (of the O Flynns) of Dál Cais, down in Munster in the 10th century

Co Cork
A branch of the Corca Laoighdhe, a tribal grouping said to be decsended from 3rd century warrior, Lugaid mac Con. These were in the extreme south of Co Cork, Ibaune Barony. They had a castle, near to Baltimore.

Also in Co Cork were the O Flynns of Muskerry, in the barony of that name. The name Muskerrylinn is an anglicisation of the Irish Muscraidhe Uí Fhloinn.

Co Antrim
A sept located in the barony of Toome, originally O Flynn, now mostly anglicised as Lynn, and re-Gaelicised as Ó Loinn – the initial 'f' was aspirated. This is one of those interesting families, whose former fame time seems to have eclipsed. Their power was in the Middle Ages; and they are often mentioned in the Annals (it is a similar case with Ó Ciardha [Carey] Ó Cananáin [Cannon] et. al.) They militarily defeated the Anglo-Norman invaders in 1177, but after the middle of the 14th century 'disappear' from history.

By the time of the 1659 'Census' conducted by Sir William Petty, (O) Flynn is found as a 'Principal Irish Name' in the following counties:

Co Roscommon
Ballintobber Barony, Flin (29-all figures are for families); 'Feoghra Flin Esq' is listed as a 'titulado' (proprietor/gentleman) of Ballinlagh, on the same page; Boyle Barony, O Flin (9).

Most Flynn births in 1890 occurred in counties Cork, Dublin, Waterford, Roscommon and Leitrim.

Críostóir Ó Floinn (born 1927) Limerickman, who has written plays, poetry and essays etc in Irish and English. His plays have been performed at The Abbey and The Gate theatres in Dublin, and the Lyric in Belfast. His edition of the Michael Hogan (The 19th c. Bard of Thomond) poem 'Drunken Thady and the Bishop's Lady' is a collectors must

Errol Leslie Thomson Flynn (1909-1969) born in Tasmania, of Irish, English and Scottish descent. Heart throb and super star of the silver screen in its Hollywood heyday, his antics were the source of much notoriety, and engendered the phrase 'in like flynn'.

The Flynn Family Message Board