11,843 Farrell Members around the world.

Farrell members around the world 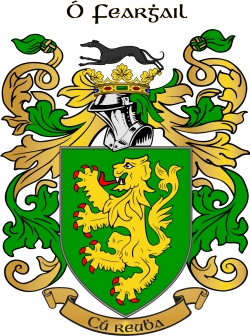 Design your own Farrell Family Crest

ÓFearghail- anglicised Farrell, O Farrell, earlier OFerrall &c. The root is thought to have come from 'fear' (man), and interpreted as 'manly valour' and 'super-valour' (the latter from Woulfe, 'Sloinnte Gaedheal is Gall', 1923).

Ó Fearghaile- anglicised as Farrelly and Farrell &c., which Woulfe treats as a variant of the above. Farrelly is more often associated with Ó Faircheallaigh, an entirely unrelated name of a sept in Co Cavan.

The surname was primarily a Co Longford name, the leading family being the rulers of Annaly, centred on the town of Longford, itself originally in Irish known as Longphort Uí Fhearghail (the 'F' being lenited as in the genitive case). They are mentioned frequently in the Annals. This family divided into two branches: Ó Fearghail Buidhe and Ó Fearghail Bán. They maintained their control of most of Co Longford and part of Westmeath, until the intervention of the English Elizabethan conquistador, Sir Henry Sidney, in 1565; however, a still deadlier challenge arrived with the Cromwellian expugnatio of the mid 17th century. Nonetheless, they were not overwhelmed as others were, and they took part in the native resistance to the newcomers' encroachments. This spirit lived in Ceadagh Ó Fearghail of Annaly, who fought and died at the Battle of the Boyne in 1691.

Other septs of the name existed in the counties of Wicklow and Tyrone, although they have less of an historical eminence.

By the time of Sir William Petty's 'Census' of Ireland in 1659, (O) Farrell is mentioned as a 'Principal Irish Name' in counties:

Cos Tyrone and Wicklow are missing from the 'Census'.

The Registrar General's 'Special Report...on Surnames in Ireland' (1894, 1909), based on birth distribution of 1890, shows most Farrells in counties Dublin, Longford, Louth, Meath, Westmeath and Roscommon. 205 of the 311 births were in Leinster.

Mairéad Farrell (1957-1988) Irish revolutionary. Member of an I.R.A. team that went to Gibraltar. She was gunned down by an S.A.S. team after trying to surrender.

The Farrell Family Message Board