Dunne members around the world 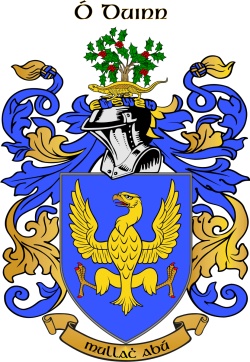 Design your own Dunne Family Crest

This is a great midlands surname. Interestingly, it is etymologically cognate with the English surname Dunn, Donne &c., although there is no genealogical connection. Rather we would look back to an Indo-European word with the meaning of 'dun coloured' or 'brown' which filtered into both the Irish and English languages.

The Ó Duinn sept were lords of Iregan in Leix, which in Irish would be from Uí Riagain, a tribal grouping descended from Cathaoir Mór, a 2nd century king; their territory was roughly co-extensive with the later barony of Tinnahinch. Woulfe writes that the Dunnes go back to the Uí Failghe, likewise descended from Cathaoir Mór ('Sloinnte Gaedheal is Gall', 1923). These Dunnes built Tinnahinch Castle in the 15th century, which was destroyed by the Cromwellian forces in 1653. The English Puritans regarded the (O) Dunnes as being the most recalcitrant papists and rebels in the 1641 Catholic Rebellion (see biog. notes). The family seat was moved to Brittas in the same county, where the leading family eventually became 'loyalist', e.g. in the person of Major General Francis Plunkett Dunne, who built an Anglo-Irish style family mansion there in 1869.

Another sept, Ó Duinn of Tara, in Meath, were scattered after the Anglo-Norman invasions of the late 12th century.

In the 'Annals of Inis Cloghran', O' Donovan transcribes an entry for 1160 thus: 'Giolla-na-Naomh O Duinn, lecturer of Inis Clothran, Professor of History and Poetry, and a well-spoken and eloquent man, sent his spirit to his supreme father, amidst a choir of angels on the 17th day of December, in the 58th year of his age'.

By the time of the compilation of the 1659 'Census' by Sir William Petty, the British Commonwealth's Surveyor of Ireland, the (O) Dunnes are recorded as a 'Principal Irish Name' in the following counties:

The Registrar General, R.E. Matheson's 'Special Report on Surnames...' (1894, 1909), based on the 1890 birth registration figures, shows most Dunne registrations in counties Dublin, Laois (Leix), Kildare, Offaly, KIlkenny, Cork and Tipperary. It was the most numerous name in Laois. Totals were 313 Dunne and 51 Dunn: Leinster 248, Munster 55, Ulster 47 and Connacht 14. In 1890 Dunne was 27th in the numeracy table for Ireland.

Cahir o Dunne of Offaly and Rory Dunne of Leix were among the many Dunnes cited in the 1641 Depositions as participants in the Rebellion of that year against the British colonists.

James O Dunne (1700-1758), bishop of Ossory in Leix was an enthusiatic supporter of the Jacobite cause.

Ben Dunne (b. 1949) founder of the ubiquitous Dunnes Stores, underwent a dubious enhancement of his celebrity status by being kidnapped by the I.R.A. in 1981.

The Dunne Family Message Board