90,637 Donnelly Members around the world.

Donnelly members around the world 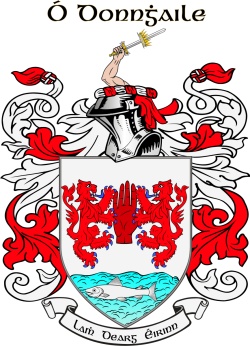 Design your own Donnelly Family Crest

Ó Donnghaile- anglicised as Donnelly, Donneely, O'Donnelly, the root is the personal name Donngal or Donnghal, which according to Ó Corráin & Maguire ('Irish Names', 1990) who are experts in the field, means possibly 'of princely valour'. Woulfe et.al. gives 'brown-valour' as the meaning ('Sloinnte Gaedheal is Gall', 1923).

The (O) Donnellys are of the Cenél Eoghain, who in turn descended from Niall Náigiallach (Niall of the Nine Hostages), the legendary 4th century king of Ireland. The (O) Donnellys' remote ancestor Domhnall was brother to Niall Glúndubh, the eponymous ancestor of the O Neills: thus they are akin to the O'Neills. The Donnellys' original territorial holding was around Drumleen, Co Donegal, but they were expelled from there by the Cenél Conaill, who descended from another son of NIall Náigiallach! The Annals of Ireland bear eloquent witness to the internecine squabbles and fratricidal strife of early medieval Ireland, long before the arrival of the common enemy, the Anglo-Normans. Soon after their expulsion they settled in the present Co Tyrone, Baile Uí Dhonnghaile (Ballydonnelly) to be precise. This place is now called Castlecaulfield, just west of Dungannon, where the hereditary inauguration stone of the O Neills is located.

It was in service to the O Neills that the famous Shane O Neill was fostered by the (O) Donnellys. A cohort for Hugh O Neill's army was provided by the Donnellys, and fought to the last man at the Battle of Kinsale in 1601. Post Kinsale, the holding of Ballydonnelly was confiscated and awarded to the settler Caulfield family.

Two other Donnelly families are on record, neither of which are related to the above: of Sligo and of Cork. The former were of the Uí Fiachrach, the latter of the Corca Laoidhe, and seated around Dunmanway in West Cork.

By the time of the 1659 'Census' of surveyor Sir William Petty, Donnelly appears as a 'Principal Irish Name' in the following counties:

(Numbers after names are for families not individuals)
Co Donegal
None

Co Tyrone is missing from the 'Census'.

Cos Sligo & Cork, none found.

The Registrar General's 'Special Report on Surnames...' (1894, 1909) based on the birth registrations' distribution in 1890, shows most Donnelly entries on the register in counties Antrim, Tyrone, Armagh and Dublin.

Michael Thomas Donnelly (1927-1982) born in Belfast. Irish missionary priest who spent much of his active life in Malawi, Africa, to whose people he was devoted.

Michael W. Donnelly (1959-2005) U.S. Major and Gulf War Veteran and activist/campaigner for the recognition of the affliction of Gulf War Syndrome. He led a 6 year campaign to prove a connection between Lou Gehrig's Disease (with which he was diagnosed in 1996) and active service in the Gulf. He was also an author, and wrote the book 'Falcon's Cry'.

The Black Donnellys were a family from Co Tipperary who emigrated to Ontario, Canada in 1845. They became notorious as the protagonists of a disregard for the law, resulting in crimes like arson and 'swearing at the police', viz. at Constable Carroll. All of which hardly justifies the act of mob revenge in 1880, which resulted in the deaths of 5 members, some of whom had their skulls smashed in by spades. Their assailants were, for the most part, other members of the Irish community. Evidence was produced of involvement in the massacre by the Biddulph Peace Society (sic), which included the Catholic parish priest, Fr John Connolly

The Donnelly Family Message Board