70,161 Delaney Members around the world.

Delaney members around the world 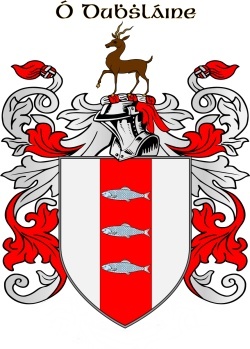 Design your own Delaney Family Crest

Ó Dubhláin - meaning perhaps 'black challenge' has also been anglicised as Delany and Delaney, according to Woulfe in 'Sloinnte Gaedheal is Gall' or 'Irish Names and Surnames' (1923).

The name Delane is found in Co Mayo; MacLysaght treats this as an abbreviated form of Delaney ('The Surnames of Ireland', 1985 et al), although it may stand for Ó Dalláin.

Delaney was recorded early in the barony of Galmoy in Co Kilkenny, and Ossory in Laois, at the foot of the Slieve Bloom Mountains.

These would be the origins of Irish Delaneys and probably the majority of Delaneys anywhere, in fact, through Irish immigration.

In Sir William Petty's 'Census' of 1659, the name occurs as a 'Principal Irish Name' in:

Co Kerry
there is a listing for O Dulinge, which would be the transplanted Ó Dúnlaing sept, who also came from Co Laois. This name is usually anglicised as Dowling].

In the Registrar General's Report on births in 1890 Delan(e)y is the most common entrant for Co Laois.

There is also a distinct name of French origin, Delaunay/Delaney/Delany & c. meaning 'of the alder grove', found in many parts of France, e.g. Normandy, Poitou-Charentes, Ile-de-France etc. Some instances of Delaney in Britain probably have a continental Norman origin, although there must be many of Irish immigrant stock.The French name is still extant and widespread in France. The phonetic variants Daunay and Dawnay are mostly found in Britain.

The Delaney Family Message Board