89,828 Connolly Members around the world.

Connolly members around the world 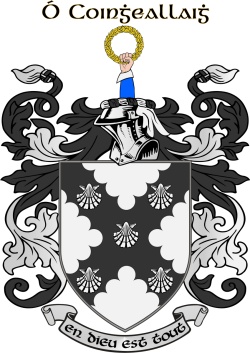 In God, All Things

Design your own Connolly Family Crest

Mac Conghalaigh- anglicised Connolly, earlier M'Connolly; a rare Sligo/Leitrim name, according to Woulfe in 'Sloinnte Gaedheal is Gall' (1923), of similar derivation to the above. But see parentheses below.

The first of these is probably the most well known, and the homelands would be in in Connacht and Co Monaghan. The leading sept were of the Southern Uí Néill, i.e. descended from the legendary Niall Naoighiallach (of 'the nine hostages'), the fabled late 4th century king of Ireland. They were one of the 'Four Tribes of Tara'. Their original territory was in Co Meath, from where they were driven by the Cambro-Norman mercenaries in the late 12th century, settling in Co Monaghan. This is also the name of a Co Roscommon family. The surname is found in later times also in Co Galway.

The second family seems to have appeared little in Irish history, although a search below in the 1659 'Census' of William Petty, the English administrator 'par excellence', will provide some instances.

The third, Munster surname, which MacLysaght ('Irish Families' series 1982, 1985) gives the form Ó Coingheallaigh, although Woulfe treats it under the form Ó Conghalaigh, is claimed to derive from Mahon, a brother of Brian Boru, the illustrious 11th century king, who curbed the power of the Norse settlers. They, like the O'Briens, are of the Dalcassian tribe of Thomond. According to MacLysaght (op. cit.) they were formerly strong in West Cork.

By the time of Petty's 1659 'Census', therefore, we find the following, listed as 'Principal Irish Name':

Co Cork, none of the name appear in Petty.

However, in Co Tipperary, Barony of Iffa & Offa, 9 of Connelly/O Connelly. (This area was in the Dalcassian sphere of influence).

The returns for Cos Galway and Cavan are missing from the 'Census'.

The Registrar's 'Special Report' (1909) on births distribution in 1890, show most Connolly births in Cos Cork, Monaghan, Galway, Antrim and Dublin. For Connelly, Galway.

Tirlogh O Connola is mentioned in the Elizabethan 'Fiants' for 1591 as chief of his Monaghan clan. He was a military leader who opposed the English incursions of the late 16th century.

James Connolly (1868-1916) Edinburgh born Labour leader and Irish Revolutionary. His amazing life: born into poverty, joined the British Army, became a socialist leader and inspirational speaker and writer, was an organiser of the American I.W.W. (the 'Wobblies'), and later leader of the I.T.G.W.U. union in Dublin, founder of the Irish Citizen Army and co-signatory of the 1916 Proclamation. He had a leading military role in the Easter Week fighting. Wounded and suffering from gangrene, he was taken on a stretcher to Kilmainham Jail and shot by a British firing squad.

The Connolly Family Message Board