Condon members around the world 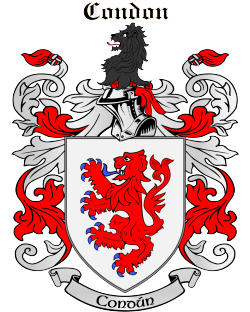 Design your own Condon Family Crest

The Condons settled in the counties of Cork, Limerick and Waterford. The Barony of Condons and Clangibbon in north-east Cork bears their name, the family castle of Cloghleagh being in that area. They developed as a Gaelicised sept, but like many other great Norman families, were proud to be different from their native neighbours. This is reflected in the habit of these families to use non-gaelic first names right up to almost modern times. Thus David Condon described homself in 1605 as 'chief of his sept'.

Their problems in later times were compounded by their adherence to the Jacobites; and they suffered in attainders and confiscations accordingly.

In Petty's 1659 Census of Ireland, we find Condon listed as a Principal Irish Name in:

Co Cork: Barrymore Barony with 13 families; the returns for Condon and Clangibbon are missing.

In Co Limerick, Connolough Barony we find Condon (x9). In Co Waterford, Barony of Cosmore and Cosbride there are Condon(x6).

In Co Tipperary (south), Barony of Iffay and Offay there are Condon (x12).

In the Registrar General's Report on Births in 1890, most Condons were registered in counties Cork, Tipperary and Kerry.

Two famous Condons:
David Condon (another David, see above) accomplished Gaelic poet, temp James II
Edward O' Meagher Condon (1835-1915) was a Fenian; involved in the Manchester Raid in 1867 and condemned to death; this was commuted because of his American citizenship.

The Condon Family Message Board