Carey members around the world 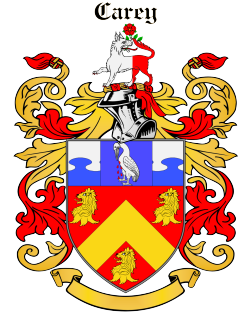 Design your own Carey Family Crest

1) Ó Ciardha, modern spelling Ó Ciara- anglicised Carey, Keary, earlier as (O) Cary, (O) Carie & c. the root is 'ciar' -'dark', 'black'. A sept of the Southern Uí Néill, rulers of Cairpre Laigen in modern Co Kildare. They were dispersed from Carbury by the Cambro-Normans after the 1170s.

O' Donovan wrote (1862): 'O'Ciardha, now anglicised Keary and Carey, a rather numerous name in the counties of Meath and Kildare', and 'the name is common, but to be found only among the lower orders'.

2) Ó Ciaráin/Ó Céirín root 'céir/ciar' -'dark', 'black', anglicised Kearan(e), Kearin(e), Kerin(e) &c, and Carey. Ó Ciaráin was the name of septs in SE Cork and Donegal. Ó Céirín were chiefs in Costelloe Barony, Mayo, recorded in the Annals as Ua Ceirin (1155). There was a Cormac Cary (sic.) recorded in Mayo as early as the 1641 Depositions. Keern/Carey are recorded synonyms in the registers of Ballymena Union in Co Antrim (Matheson, 1901).

4) Mac Fhiachra - anglicised Keary, Carey, earlier phonetically as Keghery, Kehery &c., the root is 'fiachra' - 'battle king' or 'raven'. They were chiefs of Cinel Fearadhaigh, a branch of the northern Uí Néill, with septs in SW Galway and Co Meath. MacLysaght in 'More Irish Families' (1982) writes that 'the Co Galway sept Mac Fhiachra 'survives in considerable numbers under the alias of Carey'.

7) Mac Fhearadhaigh - anglicised McCarry, McCarey, earlier MacKeary. A name of Oriel. In the 1850s (Griffiths op.cit.) there are a few families of McCarey in Monaghan, Donegal and Antrim.

8) Ó Carráin/Ó Corráin - anglicised early as Carrane, Carrone, Curran(e), Carew, and Carey. The sept held lands round Mobernan, near Fethard in South Tipperary. Donald O Carrane of Mobernayne, 1586 is mentioned in the 'Fiants'; Conor Carew of Mobarnan was a representative at the Catholic Confederation of Kilkenny, 1642. The Court of Claims, 15th July 1663, has a request for return of Mobernan lands in Tipperary forfeited by 'Teige Carrue alias O Carron'. Brothers, priest Thomas Carue (d. 1672) and royalist soldier Sir Ross Carey (as on Westminster Abbey inscription to his wife Lady Hyde, 1660) are of this family. Woulfe & others have fallen into the error of treating Tipperary Carew at 'face value' as 'Norman'. The Cambro-Norman Carews had died out in Tipperary by the end of the 15th c.. (see Paul MacCotter, 'Irish Roots' magazine, 1997).   Norman families in the 17th c. wouldn't use Gaelic forenames like 'Teige', 'Conor' etc

There are many 'Carrane' in the 1659 Census in south and mid Tipperary, 22 families (Iffa and Offa barony), 34 (Middlethird). In the 1664 Hearth Money Rolls: Teige O' Carrane, Laughlin Carrane, Patrick Carine & c.

Paul MacCotter has claimed in 'Irish Roots' (1997) that the rare East Cork Norman-Welsh surname Carew survived there under the form 'Carey'. However, the East Cork Carews of Garryvoe appear to have died out in the male line in the 1660s (Brit. Mus. Funeral Certificate MS 4820; v. Carew page); Carey in this area is regarded as an Anglicisation of Ó Ciaráin by Dr E MacLysaght,( 'Irish Families', 1985).

The Religious Census of 1766 for Co Tipperary has many entries for Car(e)y, all of whom are native 'Papists': e.g. John & Cornelius Cary, Clonoulty; Thomas Keary, Kilfeacle; Daniel Keary, Killea; Laughlin Carey and 4 other Careys, Knockgraffon, Cahir; John Carey/Keary, Lattin; Darby plus 3 other Carys, Soloheadmore &c; Edm Keary, Templenoe. There are several Carews, also Catholic, in Cloneen, Toom and Fethard.

The Registrar General's 'Special Report...' (1894) based on births in Ireland for 1890, shows highest occurrences of Carey in Cos Cork, Dublin, Tipperary, Mayo and Kerry.

O' Hart in 'Irish Pedigrees' p 499, (1887) describes the arms for Keary/Carey of Fore, Westmeath as 'azure, a lion passant, guardant, or' with a crest of 'an arm in armour, holding a spear point down, ppr'. The same arms appear under 'O' Carrie/O' Carry' in Burke's 'General Armory', 1884 . The arms at the head of this page appear under 'Carey' in Burke (op. cit.) and for 'Carey' in John Rooney's 'A Genealogical History of Irish Families...' New York (1896), with the difference of 'argent' (silver) instead of 'or' (gold) in the main shield; and in chief (at top) instead of a pelican there is a heron with an eel in the beak.

The arms of an English family of Car(e)y from Devon or Somerset (Burke, 1884) 'argent, on a bend, sable, 3 roses of the first' are often wrongly assigned to Gaelic-Irish Careys by 'heraldic firms', probably because two such landlord families settled in Ireland: a) Cary at Inishowen, Donegal (c. 1600); b) Carey at 'Careysville' near Fermoy, Cork (c.1650) also Clonmel (c.1780). The latter family is definitely extinct. Carey is a common native Irish name in these areas, and especially so in Cork.  Even in Donegal, the Inishowen Anglo-Irish family of Cary lived in an area alongside eight native Catholic Carey farming families (see 1901/11 Census).  In the 1911 Census for Donegal out of the 20 Carey families listed, 4 were Church of Ireland and 16 Roman Catholic.

British names were used as 'models' in the anglicisations of Gaelic names in the 17th century, e.g.  Brady, Boyle, Conway, Kenny, etc. Elizabethan,  Sir George Car(e)y of Devon was Elizabeth's Treasurer of Ireland,  1598-1606.

Denis Carey (d. 1798) of Old Leighlin, Co Carlow, was hanged for his part in the 1798 Rebellion. On his way to the infamous court at Hackett's Inn, taken over by the Yeoman, his wife cried out to him as he passed in the cart, bound and fettered, 'Make no more widows!' He replied he wouldn't. He kept his silence.

Car(e)y as a British surname was most numerous in Somerset and Devon, and probably derives from Castle Cary on the River Cary, Somerset,  or Carey on the River Carey, Devon.  The names are Old European/pre-Celtic and probably mean 'stony/hard' from OEur -'karisa' (Wattts, Cambridge 2003). Example: Sanson de Cari, Devon, 1198.  Philip de Kary, Somerset 1203. (Feet of Fines)

The Carey Family Message Board