Burns members around the world 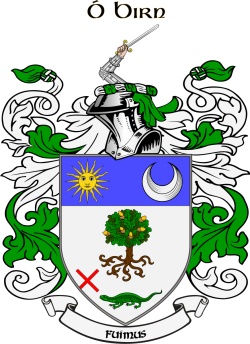 We have always been

Design your own Burns Family Crest

Ó Birn, Ó Beirn - anglicised as (O) Beirne, Byrne, Byrnes and Burns, even occasionally Byron. The root is descendant of Bjorn, recté Björn, an Old Norse name meaning 'bear'. A branch of the Siol-Muireadhaigh or Silmurray, and descended from Muireadhaich Muilleathan, king of Connacht circa AD 700. They were kin to the O Connors, MacDermotts and MacDonaghs. The sept anciently held lands in what later became Co Roscommon at Tír Bhriuin, where they became chiefs in the 13th century. Another entirely distinct family held land at Ballinrobe in Mayo. These were of a different root, the Uí Fiachrach, descendants of Fiachra, brother of Niall of the Nine Hostages, circa 4th century, founder of the great royal Uí Néill dynasty.

Mac Conboirne - anglicised as Burns, earlier M'Conborney. Woulfe gives the root as 'Cu-Boirean', hound of Boirean, a territorial name (i.e. the Burren in Clare): v. 'Sloinnte Gaedheal is Gall', 1923. O' Donovan, the antiquary, found it still extant in the 19th century as Burns. The family were of the Uí Fiachrach in Mayo.

Ó Bioráin - anglicised as Birrane, Byron, Byrne, Burns &c., The root is personal name Biorán, with perhaps the meaning of 'stripling'. Woulfe (op.cit.) specifies Tipperary and East Limerick as the homeland of this name. There is also a Kerry surname, Ó Bioráinn.

Ó Conboirne, Ó Boirne - anglicised as Byrne and Burns. The root is the same as (2), 'Cu-Boirean'. The name was found still in Mayo by the antiquary, O'Donovan, under the disguise of Burns. Woulfe treats this as a variant of (2).

Ó Broin - anglicised as (O) Byrne, Byrnes, Burns and even Byron. The root is generally regarded as 'brán', raven. This is the great clan of counties Kildare and Wicklow, originally of the Uí Faolain, and descendants of Cathaoir Mór, the legendary king of Ireland. The leading O Byrnes were driven from their Kildare possessions by the Normans, but began a long struggle with the invaders from their acquired territory in the Wicklow Mountains. For this name see the Byrne Page.

Burns is also a Scottish import, numerous in Ulster, which itself is either a topographical name from 'burn', Middle English and Scots for stream, or from Burnhouse, shortened to Burness, Burn(e)s, from a village in Ayreshire.

In the 1659 'Census' of William Petty, Commonwealth surveyor in Ireland, we find listed as a 'Principal Irish Name' the following:

Co Clare, Burren, Bryen 7 (however, this could also be O Brien).

Co Tipperary
Middlethird, Burren with 6 families. There are many Bryen & Bryon etc across Tipperary, but these would seem to be O Brien, which as a Dalcassian name is, of course, most strongly represented in Tipperary, Limerick, Clare etc. (v. note on Limerick).

From this may be seen that Burns as such divides into two groups: the northern group which most probably represents the Scottish settler name, though not in all cases; and the southern group which would represent, in most cases, one of the Gaelic patronymics listed above. In the latter group the spelling 'Burns' is of comparatively late appearance in the process of anglicisation.

This picture is reinforced by the birth registration figures for 1890, published in R.E. Matheson's 'Special Report...' of 1894 and 1909, where most occurrences of Burns fall into two distinct groups: 1) Antrim, Down, Armagh; 2) Clare, Cork, Kerry, Tipperary.

A Couple of Burns:

Patrick Burns (1856-1937) Canadian rancher, born in Ontario. His parents emigrated from Ireland. The family name was originally O' Byrne, shortened to Byrne and finally to Burns. Patrick had little formal schooling, but was a canny dealer in cattle and became a rancher and meat dealer on a truly enormous scale. He also acted as a railway construction contractor, and was active in the development of Canada's rail system.

The Burns Sisters, Marie, Annie and Jeannie, are an American folk group active in recent years. They belong to an Irish Catholic New York family. Their father, John J.Burns, was a former mayor of Binghampton, and ran the Robert Kennedy campaign for the Presidency in New York state. Among their greatest albums one would include 'Endangered Species' (1986), 'Songs of the Heart' (1993) and the most recent, 'Hills of Ithaca' (2012).

The Burns Family Message Board